The program for the event was as follows

THE SECOND ANNUAL CELEBRATION OF

THE ISLAMIC HISTORY MONTH IN CANADA

THE SAILAN MUSLIM FOUNDATION OF CANADA

Sailan Muslim Foundation of Canada (SMFC) celebrated for the second year in succession, the Islamic History Month in Canada (IHMC), at the Islamic Institute of Toronto (IIT) on Saturday, the 25th of October, 2014.

IHMC was proclaimed through a motion in the Parliament by Hon. Mauril Belanger, initiated by the Canadian Islamic Congress in 2007. Since then it has been adopted by the Muslim Community throughout Canada, giving a golden opportunity to share the rich heritage of the Muslim world, contributions made by Muslim scholars and inventors.

The success of the event was mainly due to the unity displayed by all the Sri Lankan Muslim organizations in Toronto and the GTA coming together. Over 700 people participated in the event and the Islamic Institute of Toronto auditorium was filled to the capacity.

The Master of the ceremonies role was played by Mr. Rimzy Kuthubdeen who welcomed the guests to the event, wishing them the best for the Islamic New year and commenced the event, at 5.30 pm, with the recital of a part of the Sura Ar-Rahman from the Holy Quran by Taib Ibnu Zubair and translated by Yakoob Farzan.

The national anthem of Canada was sung by a group of young children and joined by the guests.

The president of Sailan Muslim Foundation of Canada (SMFC) Mr. Ifthikhar Hassan highlighted the role of “building bridges” within and outside the community and the need for a new language of collaboration, consultation, balance and openness. He also emphasized on the need for relevant and contextual knowledge and institutions within the community that fills this role.

Imaam Yusuf Badaat, the chief Imaam of Islamic Foundation of Toronto made a very relevant speech on today’s situations and recalled how calamities were handled by the Prophet Muhammad (Peace be upon him) during his life time. He recalled incidents of love, peace and leadership.

Imaam Yusuf Badat emphasized that acts of violence by radicals has no place or part in Islam and that Muslims should show by deeds of compassion and consideration.

A token of appreciation was presented to Imaam Yusuf Badat by Mr. Dilano Sally the president of the Sri Lanka Malay Association of Toronto (SLAMAT). 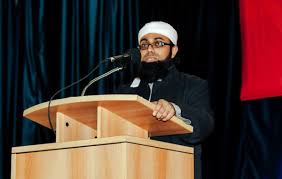 Over 700 people attended the function and this is the first time a Sri Lankan Muslim community had a gathering of this nature in an inside facility.

Hon. Chris Alexander PC MP the Minister of Citizenship and Immigration, commenced his address by wishing the crowd ‘Happy New Year’ as the function coincided with Islamic New Year.  Hon. Chris Alexander in his speech impressed upon the fact that although Canadians were saddened by the recent tragic incidents in Ottawa and Montreal, it has also brought them together. He emphasized the fact that isolated incidents of violence by crazed individuals acting alone cannot tarnish the image of Canadian Muslims in general. A token of appreciation was presented to Hon. Chris Alexander by Mr. Seyad Mubarak, the president of Masjid-Ut-Taqwa (TAQWA). 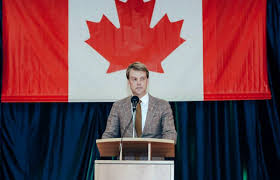 Shaikh Habeeb Alli presented a slide show that showed the Muslims who had made contributions to the modern world including over 1000 gadgets that were brought over to North America by them and that due to slavery and the civil turmoil in USA they did not get patents to them. He also showed more recent Muslim personalities who have shown the way to freedom and peace and worked against violence and bigotry. A token of appreciation was presented to Shaikh Habeeb Alli by Mr Fouzdeen Salahudeen, the president of Quran and Hadees Society of Canada (QHSC). 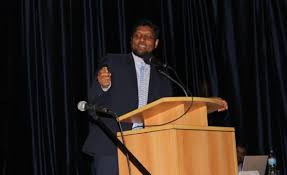 Dr. Abdullah Hakim Quick, Imaam and resident scholar at the Islamic Institute of Toronto, has researched that among the native Inuits of Canada there were people who were monotheistic and stated that this was a testament to the verse in the Quran that says “there is no people or nation to whom we did not send a warner or messenger with our clear signs”

He also indicated that in the 1860s there were Muslim settlers in Alberta with western names but practicing Islam. They came from the early European settlers.

The guests were enthralled by the content and depth of information and facts that were presented by Dr. Abdullah Hakim Quick in highlighting the early presence of Muslims in North America and their rich contribution to the world in all fields of knowledge and progress.

A beautiful Nasheed (Islamic Song) was sung by our youth (Hasna Salahudeen, Sarah Zawahid, Muna Shiraz and Amal Iqram) in praise of our beloved Prophet Muhammad (Peace be upon him). 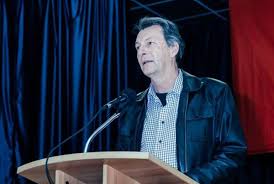 Hon. John Mckay in his speech narrated his personal experience on the Parliament Hill on the day of the tragic incident and how he advised Fox News to get the facts before they report and jump to conclusion. He reiterated on the theme of the event of building bridges between communities so that misconceptions and stereotypes are broken down. A token of appreciation was presented to Hon. John McKay by Mr. Shiraz Mohideen, the president of Sri Lanka Islamic Foundation of Ontario (SLIFO). 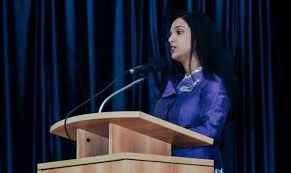 The event culminated with the guests enjoying a delicious spread of food from various regions of Sri Lanka with an emphasis on Muslim culinary specialities.

The vice president of Sailan Muslim Foundation of Canada (SMFC), Mr. Sameem Mohamed delivered the vote of thanks.

Sailan Muslim Foundation of Canada would like to thank all our guests, volunteers, sponsors and all those who played a part in making this event a success. We hope to see you next year.