A mere four hundred years after the demise of the Prophet (pbuh) the political fragmentation of the Islamic world had already begun, and continued in the centuries after. The Muslim ummah, once united along lines of faith, has over these centuries disintegrated into more than seventy small states with innumerable mutual disagreements and conflicts 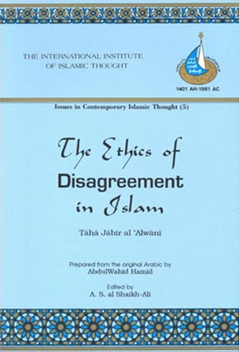 Indeed, writes Taha Jabir al ‘Alwani in The Ethics of Disagreement in Islam, these differences are at the root of the crisis, by all means an intellectual one, which has affected the Islamic world and brought it to deplorable levels from its onetime glory.

Disagreement in religious matters is nothing new, nor is it something abhorred or prohibited in Islam. Indeed it is the legacy of the prophet (pbuh), who gave enough knowledge to ensure we do not fail in our belief and just enough room to maneuver to enable humans to mould, suit and adjust God’s religion to the varying challenges that the twists of temporal and geographical settings were bound to impose upon us. Therefore it is in the very nature of Islam that disagreements and varying interpretations in minor matters occur due to the differences in intellect, perspective and perceptions of human beings, who are a diverse lot living in diverse times. This is how Islam, being the perfect religion of Allah most high, moulds itself to the differences among us as Muslims.

A historical glimpse at the disagreements between believers reveals a multifaceted picture. Disagreements that happened among the companions during the time of the Prophet (pbuh) were referred to the Prophet (pbuh) himself and dealt with by him. But after the Prophet (pbuh)’s time and the reign of the Rightly Guided caliphs a number of factions began to appear in the region of Iraq; among them the Khawarizites, Shia, Jamiyah and Mu’tazila. These years were rife with false and fabricated Hadith, and with opportunistic and politically motivated interpretations of the Shari’ah. It was during these years that scholars came together in a valiant effort to put right the declining standards of Islamic Law. And thus were born the four madhabs, or schools of Islamic Jurisprudence; Maliki, Hanafi, Shafi and Hanbali.

The four madhabs had varying methodologies and summarizes their main characteristics and scientific reasoning and logic. Of the four madhabs of the imams Malik, al Shafi’I, ibn Hanbal and Abu Hanifah the latter inclined more strongly towards techniques of independent reasoning while the first three stuck more closely to the literal interpretations of the Prophetic traditions and the activities of the Rightly Guided Caliphs.

By discussing first the history of disagreement in religious matters among the companions, then of the successors (taabi’un) and then of the four imams, Al Alwani drives home the main point of this book; Disagreements and differences in views occurred even among these righteous individuals but, rather than creating strife and bad blood, the way they handled their differences and responded to each other enriched discourse and religious thought, in turn increasing overall benefit to society. In later centuries however, these same inevitable differences contributed untold strife, misery and mayhem within the ummah.

So why it is that differences that occurred among these early proponents of Islam created a unifying effect while creating such carnage and strife in later times? People change and attitudes change, and unfortunately this includes attitudes towards religion. As wealth poured into the Islamic empire and power became commoditized, the light of imaan began to fade as most Muslims’ lives began to be dominated more and more by worldly goals. And so, to cut to the chase, the basic difference between scholars, rulers and ordinary Muslims then and now can be summed up with one word, Taqwa. Fear of Allah, faith.

The four imams understood that varying interpretations were inevitable, and respected the differing interpretations of their counterparts concerning small matters as reminders of their own fallibility and humbleness before the all knowing, almighty Allah. It is only when attitudes changed as faith lost precedence to material gains that there was a shift in the very motives of jurists. It was then that arrogance raised its head, as jurists saw personal benefit in discrediting a competitor for a particular post. This gradually turned the arena of religious discourse into a battlefield of burning arguments and crashing egos.

This transition happened as the administration of the ummah gradually split along lines of politics and doctrine. That is to say, religion and politics began to be practiced separately. In the time of the Prophet (pbuh) and the Rightly Guided Caliphs politics and doctrine were one. Faith was government and government was faith. In those early years rulers hardly consulted jurists in matters of administration because by and large the rulers were more than qualified to make those judgments themselves. But as power was gradually usurped by a more self serving, ambitious variety of political player the ummah witnessed an ever widening split between intellectual and political leadership.

These political leaders, in order for their rule to gain credibility, courted respected jurists with offers of high administrative posts and social status. And even though the more steadfast among these jurists resisted the trappings of power and politics, there arose in subsequent generations an increasing number of aspiring jurists who were more and more tempted by the potential worldly benefits obtainable from religious knowledge. Jurists started courting rulers for position and money instead of it being the other way about. And thereby many of them found the need to subvert religious exactness to fit the desires of their ruling patronage.

As a result more and more verdicts were given without proper religious evidences. Punishments for crimes were reduced or increased as jurists, or their sponsors, saw fit. Exploring loopholes and stratagems to find ways out of punishments became a special skill, and the law of Allah was subverted. Jurists started operating much like how the lawyers of the present operate in today’s secular legal climate. Along with leniency, unnecessary and unsanctioned strictness appeared as another extreme. Take the example of the Andalusian monarch who asked the Maliki jurist Yahya ibn Yahya the consequences of intercourse with his wife during the daytime of Ramadan. He was told that he had to fast for two consecutive months. When asked why the jurist had not told the monarch of the more lenient option of freeing a slave, he replied that the punishment would not mean much to the monarch since he was capable of freeing hundreds of people from bondage.

This abuse of ijtihad (or independent ruling) caused a fear of how far this corruption would go unless its flow was checked and a solution to protect the ummah from the vagaries of ignorance was sought. The answer was to resort to the rulings of previous jurists and this meant following the four main madhabs of the imams Malik, Hanbal, Abu Hanifa and Shafi’i.

But this approach too had its unforeseen negative consequences; again as a result of a lack of faith and a proactive quest for religious knowledge on the part of the ummah. As the ummah increasingly ‘outsourced’ their religious knowledge to the verdicts of the four madhabs, they neglected to engage in a constant personal journey of enlightenment and consequently ended up being blind followers of these earlier madhabs. In other words, the low levels of public knowledge in matters pertaining to Shari’ah assisted the emergence of taqlid, or the blind following without knowledge, of these schools of thought. Taqlid, coupled with the reemergence of clan loyalties, or asabiyya, provoked discord and distrust among various factions of the ummah. And conflict arose between followers of the various madhabs who ironically forgot that the founders of those madhabs themselves often showed deep respect to each other’s schools of thought, and learned much from each other.

Therefore, a gradual erosion of knowledge and faith and an improper implementation of the Shari’ah in daily lives began to turn positive disagreement and friendly discourse into negative arguing, wrangling and hatred among the ummah. Often over minor matters that were far removed from the main tenets of Islam.

Centuries passed, the Islamic Civilization continued to erode through the flowering of the Renaissance, the Industrial Revolution and increasing European interests overseas abounded. Because it was divided and intellectually confused, the colonists found it easy to infiltrate and finally topple the Ottoman Empire, the last bastion of Islamic rule in the Middle East. The colonialists followed an active strategy to gradually erode the faith even further. Religious education was discouraged, strong social and material incentives were provided to block the pathways leading to religious education all over the colonial world including Asia and Africa. And today, decades after our colonial rulers have taken flight; much of the ummah is still fumbling through the darkness of Taqlid, seemingly with no intention of finding its way back to the light.

ISIS AND ITS FAULTY LOGIC